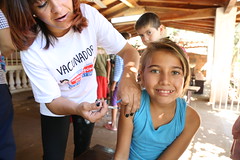 Anti-vaccination hysteria isn’t just a set of wild conspiracy claims, it’s become a big business. And like any business, the business owners aren’t about to close up shop in the face of facts. Indeed, they don’t view recent press on the topic as a a setback, they see it as an opportunity to pitch their debunked claims to a whole new audience. Among those long debunked claims now cropping up anew is this is one, laid to rest by Mark Chu-Carroll at Good Math, Bad Math:

[T]here’s a paradox that some antivaccine people use in their arguments. If you look at an outbreak of an illness that we vaccinate for, you’ll frequently find that more vaccinated people become ill than unvaccinated. Therefore, they say, it’s not the fault of the unvaccinated. We’ll look at the math to see the problem with that.

Math alway as outs those who cannot make a logical argument and rely on ‘gut’ reactions. Denying reality is the resort of those trying to maintain their Cargo Cult worlds.

Anti-vaxxers are making the choice to put others who are weaker at risk, as well as costing all of us a lot of money dealing with epidemics. With Colorado having vaccination rates below herd immunity levels, it will get worse.