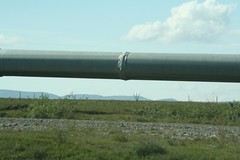 Conservatives in Congress have once again proven they are un-American and unpatriotic. This time, it’s because of their fierce approval for the construction of the Keystone XL pipeline.

The pipeline, being built and run by TransCanada, will bring tar sands oil from Alberta to the Gulf Coast. All the oil will be exported. Major beneficiaries, including House Speaker John Boehner, are those who invest in a Canadian company.

Opponents see the 1,179-mile pipeline as environmentally destructive. They cite innumerable leaks and spills in gas pipelines, and correctly argue that the tar sands oil is far more caustic and destructive than any of the crude oil being mined in the United States. They point out the pipeline would add about 240 billion tons of carbon dioxide to the atmosphere. They also argue that the use of eminent domain by a foreign corporation, in this case a Canadian one, to seize private property goes against the intent of the use of eminent domain. Eminent domain seizure, they also correctly argue, should be used only to benefit the people and not private corporations.

A foreign company using eminent domain. 35 jobs. None of the oil for us but for other countries. Environmental damage.

All good arguments but the one that sold me on which side to be on – an amendment that the materials for this pipeline, whose existence was beneficial to a foreign country, come from America.

A Senate Democrat proposed that amendment. That at least if this bill was going to be passed, the damn thing had to be made by American hands using American metal.

Every No vote for that Amendment was from a Republican. 53 of them. Only 1 Republican voted for it.

By their own actions—in business and, most certainly, in how they dealt with the Keystone XL amendment—the nation’s conservatives have proven that “Made in America” and “American Pride” are nothing more than just popular slogans.

This pipeline is not for America or Americans. It is for the rich businessman in Canada and America.