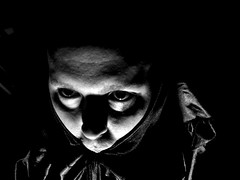 Here’s how irrational flu vaccine deniers are
[Via Ezra Klein]

It’s flu season, a time when health authorities loudly advise getting a flu shot (even if, yes, this year’s shot may be somewhat less effective than in other years). But unfortunately — as with all things vaccine related — it’s also the season for misinformation, especially among the subset of the U.S. public that is worried about vaccines or that, erroneously, believes them to be somehow dangerous.

In particular, one myth about the flu vaccine — widely enough held that the FDA and CDC have tried to directly debunk it — is that you can actually get the flu from getting the shot. The reality, of course, is that the shot contains viruses that have been inactivated and can’t make you sick. Nonetheless, the prevalence of this false belief may partly explain why flu vaccine rates are quite low — only about 42 percent among U.S. adults.

So what do you do to rid people’s heads of myths like these, and get them to vaccinate? Unfortunately, suggests a new study, telling them the straight up facts may not work — it may even backfire.

The new study is by Dartmouth’s Brendan Nyhan and the University of Exeter’s Jason Reifler, two longtime scholarly chroniclers of people’s irrationality when it comes to accepting facts that challenge their belief systems — a phenomenon that is pervasive in public debates about science, health, the environment, and much more. Nyhan and Reifler have previously documented a so-called “backfire effect” in studies of conservative views about George W. Bush’s tax cuts and the Iraq war — where providing a factual correction of false statements attributed to Bush in a newspaper article led conservatives to believe them more strongly afterwards . Moreover, in a study last year, they similarly showed that a variety of pro-vaccine messages not only failed to sway opponents of vaccinations, but some messages actually decreased their intent to vaccinate or made their wrong beliefs worse.

Another example of the backfire effect – provide someone facts that debunk a belief and many people hold onto that belief stronger. They retreat into a Cargo Cult World where their connection to reality becomes more and more tenuous as more and more facts are provided.

So, exactly the group that mosts need vaccination information – those who refuse vaccines because they are anti-vaccine – are also the most resistant to facts.

This would not be a problem if this only affected themselves. But vaccination provides benefits for everyone as herd immunity keeps disease bottled up, preventing its spread.

Flu is responsible for killing tens of thousands of Americans a year. All while these anti-vaccination people selfishly hold onto their irrational beliefs.

Giving them facts will not change their minds. Perhaps emotion will. I want to see a study where these people are called selfish, immoral cowards by perhaps their minister. Will that make any difference?

Except that is most likely factual so they will not believe it. And find another minister.