I’ve been charting the number of cases in the states of coronovirus. There are lots of different ways to do this but this is what I think provides the easiest way to see how things are doing.

I’ve compared the course of the outbreak in Washington state and New York. They seem to be taking very different courses. I normalized the number of cases to population and represent this as cases per 100,000. I then graphed that for each state starting with the first day over 10 cases in that state. So we can directly compare the outbreak in both states without worrying about the size of each state.

Here is how that looks: 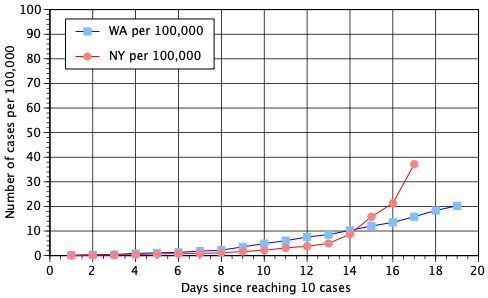 Two very different courses for the outbreak. New York was well below Washington for 2 weeks and then skyrocketd over it. Since we know how the progression of outbreaks proceeds, we can fit the data to a logistic (or s-shaped) curve. It will then tell us when the outbreak could be over  and how many cases we would see.

Assuming the number do not change. And I hope to God they do.

Because here is the data fitted to curves. First for WA:

You can see that the curve fits are pretty good for both sets of data.The curves for both states suggest the outbreak may be almost half over, ending in about 3 weeks. Washington hits around 48 cases per 100,000 then – about twice as many cases as it has today.

But here is New York’s curve, and it is frightening:

The WA curve is also shown but it is so much smaller you can barely see it. NY sould be about halfway through the outbreak in about a week. ANd NY hits over 6000 cases per 100,000 by the end, 120 times more than the cases per 100,000 in Washington.

Shit, no wonder those on the East Coast are so worried. Hoping the data are wrong, that sampling error is the problem. A few really large increases in testing over the last few days could swamp the curve fit. But WA for sure and likely NY are not constrained by testing. Both have done over 20,000 tests.

So watch the daily numbers of cases and look for the number of new cases for NY and WA to stabilize. Hope that the daily inceases in cases  for NY drop dramatically. But right now, the numbers look very bad for NY.