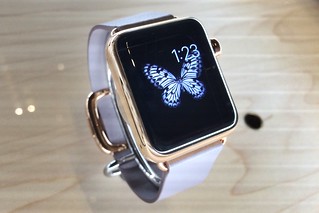 Apple Watch. Seems like Apple has a hit on its corporate hands. Or a preorder hit. The company sold a million Apple Watches in the first 24 hours—just in the U.S.—according to one piece of analysis. That would make it the most successful new product category launch in Apple’s history—so what do you do if you’ve been talking smack about it for months?

This might well be the biggest and most successful launch ever for an Apple product.

It appears from several estimates that over a 1 million Apple watches were sold the first day of pre-orders. One recent report said 2.3 million have been preordered worldwide. It took the runaway hit iPhone 74 days to reach a million sold. And the iPad took 28 days.

In one day Apple may have sold more smartwatches than an entire year of Android ones.

This is unprecedented for a new product category, one that requires previous ownership of an iPhone.This huge demand is what is driving shipping dates back.

So, to some idiots, this is a bad thing. They seem to have little ability to work with numbers.

If the trend had followed that for the iPad, the fastest selling device ever, they would have been able to easily meet demand. Even more so if it followed the iPhone trend. With a device that comes in a much larger array of choices.

Remember, it is hard to stockpile a lot of these without knowing just how many of which type are actually going to be ordered. The actual mix (estimated to be 85% Apple Watch Sport, 15% Apple watch and a very small number of Apple Edition) may be different from what Apple originally thought.

This is how we get to June before the pre-orders finally get dealt with.

Looks to me like Apple itself was caught off guard with how popular the Watch is. This is a good thing. With an average cost over $500, we are talking about $1 billion of new revenue in a very small period of time.