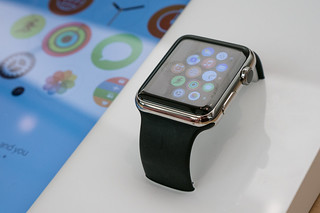 The Watch
[Via asymco]

Realizing that on the iPhone the “phone” is but an app — one which I find populated with FaceTime calls rather than cellular calls and whose messaging history is filled with iMessage threads rather than SMS — I consider it safe to say what the iPhone is today not as much a phone as a very personal computer. And so the question is whether the Watch will quickly leave behind its timekeeping anchor and move into being something completely different.

I had the chance to use the Watch for a few days and can say that timekeeping is probably as insignificant to its essence as it’s possible to be. It feels like a watch in the physical sense, looking good in the process (as the iPhone physically felt like a phone, also without being hard on the eyes)

We can now use other devices to allow us to gain access to huge amounts of information while leaving the supercomputer in our pocket. And these devices can let that supercomputer service its computational needs while doing things that are easier for us.

I expect this to again change things.