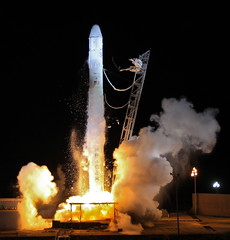 Really great news from Planetary Resources. Their Arkyd-3 test satellite (A3R) will be relaunched on Monday.

The first one – the A3 – was lost when the launch vehicle spectacularly blew up.

Now, six months later, they are ready again. And here is the cool thing – SpaceX is the launch vehicle this time. The A3R is hitching a ride to the International Space Station in order to get into orbit.

The cool thing is that this is another attempt by SpaceX to land the rocket booster after launch. If they succeed, it will be historic.

So, it is possible that a single rocket will usher in the age of reusable rockets as well as the era of asteroid mining. That is a story to look for. As NASA says, “Liftoff is scheduled for 4:33 p.m. EDT Monday from Cape Canaveral Air Force Station.”