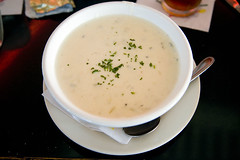 Apparently none of you guys realize how bad of an idea a touch-screen is on a phone. I foresee some pretty obvious and pretty major problems here.

I’ll be keeping my Samsung A707, thanks. It’s smaller, it’s got a protected screen, and it’s got proper buttons. And it’s got all the same features otherwise. (Oh, but it doesn’t run a bloatware OS that was never designed for a phone.)

The Samsung A707 was a real beauty.

Clam chowder is made with the remnants of stupid things said years earlier.But not just saying something is wrong but with an air of finality that is 180 degrees away from where things really went.

They are a contrary indicator. Now every phone advertized looks like an iPhone. None look like the A707.

Missing waves of innovation and failing to cross the gulf created by a paradigm shift is a hallmark of so many today. We have to fix that.