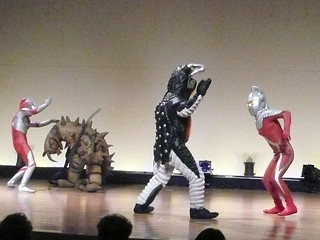 The Hugo Awards Were Always Political. But Now They’re Only Political.
[Via io9]

Last August, the Hugo Awards were swept by a younger group of women and people of color. At the time, we said “This was really a year that underscored that a younger generation of diverse writers are becoming central to the genre.” So maybe it’s not surprising that there was an organized backlash.

The new slate of Hugo Awards nominees were just announced, and you can read the list at the link. Suffice to say, the nominees in pretty much every category (other than Best Novel) come pretty much exclusively from a fan campaign called Sad Puppies, organized by Brad R. Torgersen and Larry Correia. Last year, Correia organized a campaign which successfully placed one item in each category on the Hugo slate — so this year, they decided to go further. As John Scalzi has pointed out, this was not against the spirit or the letter of the Hugo Awards rules.

This has happened before and it will happen again. The Hugo Awards have always had a strong political aspect. Just as the Worldcons that sustain them have often been scenes of intense bickering if not outright physical intimidation between opposite groups of fans.

Just read histories of the first WorldCon in 1939 – when the establishment New Fandom fought the elitist Futurians*. Lots of apparent abuse of the system to make sure that only the right people were on the committees. Several Futurians were even prevented from even attending.

Nothing is as heated as fans on opposite sides. Remember what fan is short for.

*One need only look at who the Futurians were to get the idea that historically, they won. Asimov, Blish, Kidd, Knight, Kornbluth, Lowndes, Merrill, Pohl and Wollheim.