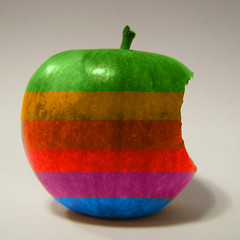 CUPERTINO, California — April 1, 2015 — Apple® today announced that the company will resurrect the original rainbow Apple logo ahead of Apple’s 40th anniversary of the company’s founding on April 1, 1976 and also as an affirmation that Apple, an American company, believes that America must be a land of opportunity for everyone, in a diverse rainbow of colors, including race, religion, sexual orientation, and more. Apple’s executive team and board of directors believe the company logo should reinforce that belief.

Going back while going forward. Good for Apple.