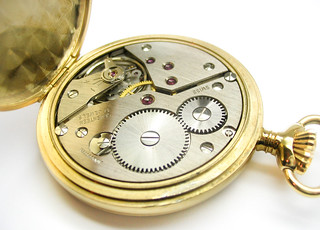 Is Apple’s real watch innovation a gold case that’s as tough as steel?
[Via Ars Technica]

There’s a long piece over at the Financial Times today about Jony Ive and Apple’s watch plans. The author, Nick Foulkes, is obviously not a techie, but he does know a thing or two about watches, and the article is worth a read if you have a horological bent.

The article does contain some interesting tidbits. For example, Foulkes tells us that “Ive explains how the molecules in Apple gold are closer together, making it twice as hard as standard gold.” This claim was greeted in the office by more than a little bemusement. Gold is a metal! Has Apple finally left a reality-based existence behind it?

Perhaps the company is not entirely crazy, though. In June 2014, Apple filed a patent, issued in December 2014, for a “Method and apparatus for forming a gold metal matrix composite.” Metal matrix composites allow manufacturers to develop complex metal components in a similar way to 3D printing with polymers, and from the looks of this patent, Apple may be using this approach for the Apple Watch’s case.

Using new technologies to create a gold watch that is harder than 18kt would be a great way to disrupt the watch industry.

It looks like they blend the gold with a ceramic powder, compress it into a die and then heat it up to create the composite.