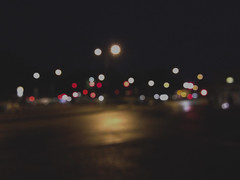 Apple Found Its Newest Billboards on the Internet
[Via Daring Fireball]

Last December, when the Bay Area had one of its rare rainy days, Cielo de la Paz took her kids out to play. She’s an avid photographer, “willing to wake up at five in the morning and hike 10 miles to get that shot of the sunrise,” and when she saw the reflection of her red umbrella on the wet concrete, she knew she had a good one.

“It took a few shots,” she said, “this was the last one I took, I was finally happy with how the wind arranged the leaves for me.”

She edited the shot with Filterstorm Neue, uploaded the picture to Flickr (she was taking part in the photo365 challenge), where Apple found it.

Then, they put it on a billboard.

What a great way to show how  imppressive pictures can look when using the iPhone. And some of these are from amateurs. Discovered on Flickr might now be a new route to fame.