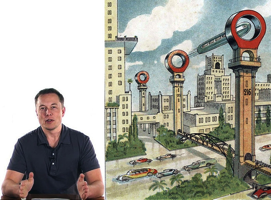 Apple would be crazy to make cars, former GM chief says
[Via – CNET]

Talk of Apple entering the car market is serious enough that former General Motors CEO Dan Akerson has felt the need to offer his two cents: Don’t do it!

Akerson, who left GM in 2014, told Bloomberg in an interview published Wednesday that if he were an Apple shareholder hearing news of the company considering building an electric car, he “wouldn’t be very happy.”

“I would be highly suspect of the long-term prospect of getting into a low-margin, heavy-manufacturing” business, he told Bloomberg.

The former CEO of the worst car maker in the US doing his best Steve Ballmer impersonation. Here is what Ballmer said about the iPhone in 2007:

There’s no chance that the iPhone is going to get any significant market share. No chance. It’s a $500 subsidized item. They may make a lot of money. But if you actually take a look at the 1.3 billion phones that get sold, I’d prefer to have our software in 60% or 70% or 80% of them, than I would to have 2% or 3%, which is what Apple might get.

That sure went well. The iPhone is not only increasing market share but also making most of the smartphone profits. Having your stuff in 60% of anything but making no money will never overcome 10% of the market with all the profits.

Because of Apple’s money, it can leverage all sorts of things to give itself a competitive edge. Few other makers can meet Apple’s prices and make a profit because Apple acts so much like a monopsonist by tying up long term contracts for parts that no one else can meet and even loaning the foundries money to upgrade themselves, as long as Apple gets first dibs.

The profit margin for Tesla is 25%. GM’s is 12%. Apple would love ot get Tesla’s and probably could.

In fact if Apple is going to make cars (something I really am skeptical of) it will follow Tesla not GM.

But if Apple ever does make a car, it will not be anything like what GM makes, just as the iPhone, iPad, iPod and Mac were not like anything that was being made before they entered the market.

Speculation is fun. I’m not even sure it will be private cars. Maybe combining auto-guided cars with flight.

Or perhaps coupling an electric car with Musk’s Hyperloop. The Hyperloop itself looks to be moving forward. Maybe you drive in your electric Apple car and get special pricing and perks (like a rest room).