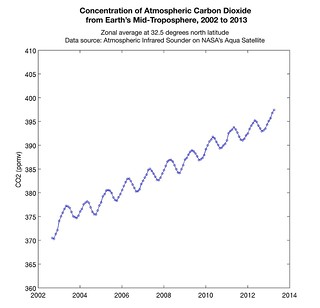 Last week, a new, peer-reviewed paper from scientists at Germany’s Alfred Wegener Institute was published in the journal Nature Geoscience. The paper is important: for the first time, it shows that scientists can use incredibly old permafrost to find out what temperatures were like in Siberia thousands of years ago. By using this permafrost, the scientists found that temperatures in Siberia have been gradually rising for the past 7,000 years.

Enter the climate denier media. After the findings were published, notorious climate denier Anthony Watts re-published portions of the Alfred Wegener Institute’s press release for the research on his site, Watts Up With That. It was then picked up by Michael Bastasch at the Daily Caller, who wrote that “solar radiation has been melting Siberian ice for 7,000 years,” evidence that “global warming is nothing new.”

In other words, the Daily Caller is using the research to reinforce a common trope among climate deniers: that the climate has always been changing, and humans therefore have no effect. In this case, it implies that Siberian permafrost is thawing due to natural causes. Greenhouse gases have nothing to do with it.

Here’s the problem. The research does not say any of that. It does not show that Siberian ice is “melting,” and certainly does not show that “solar radiation” is the cause. It also does not imply that global warming — a term that describes the effects of man-made climate change — is a phenomenon that has existed prior to the Industrial Revolution, when humans began pumping exorbitant amounts of carbon into the air.

It is so easy to understand why so many people misunderstand what is going on, when we have media that are so willing to confuse things with lies and misrepresentations.

Here they take a work and present it in a fashion meant to mislead. They want people to be confused, to think that scientists are showing climate change is not happening.

They write that there were things stated in the paper that were never stated. And they use the same tactics again and again. Repetitive and shameless misrepresentations can only be called lying.

The world is warming. Anyone who refuses to acknowledge that cannot accept facts and is simply not acting rationally.

Now why is it warming? We construct models to test different hypothesis. The ONLY models which come close to fitting reality are those that include the carbon dioxide released by humans.

And these same models can be checked by running them backwards, or starting in 1900 and running forward. Guess what? They fit the real data within experimental error throughout the 20th Century.

But only if we include human generated greenhouse gases.The models do a great job describing the data we have already generated.

As with any scientific model, if you want to remove it, you had better produce and support one that does a better job.

So, if one wants to posit that human-generated carbon dioxide is not responsible  one not only has to come up with an unknown source to explain the increasing temperature, but also why the greenhouse gases  we release have little to no effect.

It could happen since science never proves anything with certainty.  But the climate change denialists are not trying to really find that model that explains the world better than the current models.

They simply take potshots and tell lies. Exactly what every other denialist does.