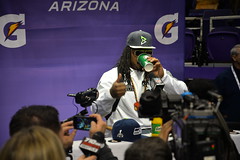 PHOENIX – Marshawn Lynch can be funny, engaging, even chatty.

When it suits his purposes, that is.

Lynch’s standoff with the media has become the cause celebre of Super Bowl week. He does the five minutes that’s required every day of him, giving the same answer to every question – Wednesday’s phrase of choice was “You know why I’m here” – and the Seattle Seahawks give him their full support.

The Seahawks say Lynch is “uncomfortable” in the media spotlight. They say he feels like a zoo animal with all those eyes on him, and reporters just waiting to bait him into saying something that will get blown out of proportion.

Perhaps the Seahawks should sell “Free Marshawn” T-shirts, or hold a fund-raiser for him. That way Lynch could blow off his obligations without fear that the NFL is going to take more of his money.

Idiot reporters gotta be an idiots.

Here we have a self-important reporter who thinks answering thinks questions is Lynch’s job. She seems to not understand that he did answer all the questions, just not the way they liked. Even though they got a column out of his remarks.

And some of the answers were direct and correct responses to their questions. The idiots did not notice.

ESPN put all his responses together. It was then obvious that while he actually said almost the same thing each time, he answered each question differently. He started out with a statement (I’m the same person I was yesterday), politely listened to each question, actually looked at the reporter questioning him and gave his answer.

And i several cases the answer was an actual reply. He gave a response that in any other context would be a great answer.

One jerk reporter replied “No. I don’t know why you are here. Tell me?” Marshawn looked over at him for a beat of two and replied “You KNOW why I am here.”

Another tried a different track. “Don’t you have anything to say to your fans, the ones who love you?” And he instantly changed his stock answer from “You know why I am here” to “THEY know why I’m here.”

These stupid reporters missed that he actually correctly and fully answered several questions. No one seems to have noticed that he immediately responded with a real answer.

It was a great performance. An innovative one. And one that reveals a sharp wit.

Too bad none of the reporters got into it. “Marshawn, the Manichean heresy believes that there is a battle between good and evil in the world. Do you think  good and evil will be present on Superbowl Sunday?” “They know why I am here.”

“Marshawn, do you have anything to say about the existential question of our presence on this planet , “Why are we here?” “You know why I am here.”

One thought on “Idiots: Marshawn Lynch directly answered reporter’s questions and no one notices”