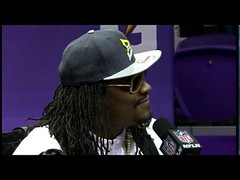 Marshawn Lynch has a unique talent for making certain people very angry. They don’t like the way he dresses, in cleats that gleam like rare coins. They hate the way he celebrates, his hands invariably reaching for his family jewels. Worst of all, though, is his refusal to engage with the press, an act that spurred one journalist to call him a “disrespectful, unprofessional dick.” Over the last two seasons, Lynch has been fined $100,000 for failing to comply with the league’s mandate that players talk to reporters; if he stays mum on media day, he could incur another massive penalty. Beast Mode’s silence has come at a great cost.

It’s also made him the most popular running back in the NFL.

If you are not a quarterback, it becomes much larder to get yourself known. Yet here we a a running back who is all over the news for what he does not say. Most idiot reporters do not get it.

But this one does. And others  see it for a very different discussion than normal for Superbowl Week.

He is now a media darling. All for showing the hierarchical authorities running the NFL how an adaptive and smart distributed democracy work.

Because he actually did not just give a rote rely. He acted exactly the part he was supposed to. He listened politely to hat they said. And then gave an answer. It may not be what they wanted to hear but as I mentioned earlier, in several cases they WERE direct and correct answers.

The NFL has been showing its brittle hierarchy the last year, with its inabilities to deal with serious crimes. Here, Marshawn is showing the idiocy of hierarchical authorities that cannot adapt fast enough.

They seem to be more upset with him, when he is actually doing what is required of him – just using an innovative approach they did not anticipate – than with men actually beating women, or concussions that destroy hte lives of players.

And what is even funnier, the reporters then turn to the other Seattle players, spending time asking them about Marshawn than stupid sports questions. And they love talking about Marshawn.

Thus, the team shows its loyalty to a player who now looks unfairly put in the spotlight.

And all the time, the more the NFL does this, the more notoriety and money Marshawn will get. It is a great win-win for everyone.