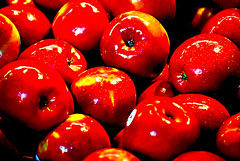 Sometimes the Herd Is Correct
[Via Daring Fireball]

James Stewart, writing for the NYT in Feb 2013, presuming that Apple’s late 2012 stock drop was inevitable and correct:

By November, with Apple stock in the midst of a precipitous decline, they were still bullish. Fifty of 57 analysts rated it a buy or strong buy; only two rated it a sell. Apple shares continued their plunge, and this week were trading at just over $450, down 36 percent from their peak.

How could professional analysts have gotten it so wrong?

It may be no coincidence that the only analyst who even came close to calling the peak in Apple’s stock runs his own firm and is compensated based on the accuracy of his calls. Carlo R. Besenius, founder and chief executive of Creative Global Investments, downgraded Apple to sell last Oct. 3, with shares trading at $685. In December, he lowered his price target to $420, and this week he told me he may drop it even further, to $320. […]

Mr. Besenius based his recommendation on technical factors — as Apple hit $700, its upward momentum and trading volume were slowing — as well as more fundamental concerns about product quality and innovation, as well as growing competition from rivals like Samsung. And there were more subjective factors. Mr. Besenius said he became uncomfortable with what he deemed Apple’s arrogance. “I loved Steve Jobs,” he said. “He built a great company. But he was one of the most arrogant C.E.O.’s I’ve ever met. The way he introduced new products was one big display of arrogance. He ridiculed Microsoft as ‘Micro who?’ That’s a good reason to be cautious. A little humility is a good thing.”

Brilliant analysis there. Steve Jobs was too arrogant in product introductions so the stock deserved to fall.

…and I feel just a few months from bankruptcy?

Carlo R. Besenius, the genius who is “compensated based on the accuracy of his calls”, recently had Apple at $45.71!! This is the lowest price on Apple. He expected Apple to drop more than 50% in price.

The ability of those who get things wrong to continue their rich lifestyles while the rest of us rest on the harsh edge of survival is a real problem. Success seldom seems dependent on actual ability.

If we hope to sustain a successful society, we need to make success more dependent on actual ability. We need the intelligent in charge, not the bandits.