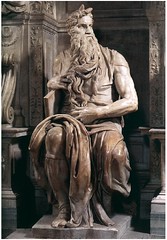 For many years we’ve been warning that intellectual property wars over things like music and movies were just a preview to the sort of insanity that would come about when 3D printing goes mainstream. We’ve seen some copyright takedowns of 3D printed objects in the past, but here’s an absolutely crazy one.

Jerry Fisher, a photographer in Sioux Falls South Dakota, was interested in 3D printing and 3D image capture. So he went and photographed two local bronze casts of Michelangelo statues, one of Moses which is on display at Augustana College and is co-owned by Augustana and the City of Sioux Falls, and another of David, which is in a local city park. He documented his efforts to take the photos and turn them into 3D printer plans. However, the folks at Augustana College demanded that he stop, arguing a bizarre mix of copyright and… “we don’t like this.” Fisher asked the city of Sioux Falls for its opinion and got back a ridiculous response:

Fisher took the fight a bit further to the city, where he was informed that the photos were probably not a problem, but transforming them into models (especially if they were to be sold) could be a copyright violation. Attempting to get the issue of contemporary photogrammetry into the light, Fisher pointed out that the statues are in the public domain — not to mention their age — or true owner of the copyright on them. What is the actual law on what can and cannot be done? After getting nowhere with the entities who started the potential battle, Fisher really had no answers.

Even while Fisher seems to recognize that there’s no copyright issue here, fearing liability, he apparently still removed his images and plans from the internet. As Public Knowledge’s Michael Weinberg explains, there is absolutely no legal basis whatsoever for the demand:

We will see more of this as 3D printing comes into greater use. Take a few pictures, create a scan and them print a copy.

That might be problematic for works that are recent. But this was of some things created before copyright even existed. One was a copy of the David in a public park. Insane.

The lawyers are going to be well paid due to 3D printing, I fear. The public will not be well served.