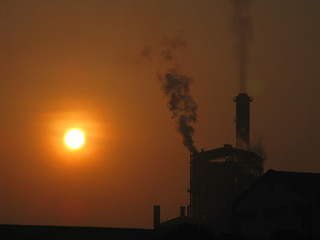 President Obama and Indian Prime Minister Narendra Modi announced on Sunday that the two countries will work together to fight global climate change, laying out a set of goals that the two countries hope “will expand policy dialogues and technical work on clean energy and low greenhouse gas emissions technologies.”

While not a concrete emissions reductions agreement like the one Obama reached with China this past November, the deal includes efforts to cooperate on reducing emissions of fluorinated gases, invigorate India’s promotion of clean energy investment, and partner to reduce the debilitating air pollution that has plagued many of India’s cities.

The agreement also emphasized that the countries would “cooperate closely” for a “successful and ambitious” agreement at the Paris climate talks at the end of the year. During that conference, 196 nations are expected to meet and tentatively agree a course of action to respond to climate change. It is widely considered the last chance for a global agreement that could feasibly keep the rise in global average temperatures under 2°C.

The three most populous countries in the world are China, India and the US. If those three countries can come together on real change to deal with the climate, then there may be hope.

40% of all the people in the world are covered here. And almost 38% of the world’s GDP.

Maybe something useful can be done.