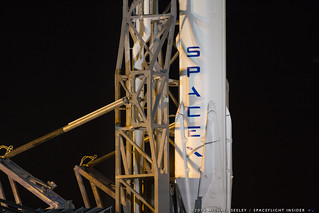 DSCOVR and Recover: SpaceX chase the cigar with next Falcon 9 mission
[Via NASASpaceFlight.com]

SpaceX will conduct a second attempt at landing a Falcon 9 v1.1 core stage on to its Autonomous Spaceport Drone Ship (ASDS) next month, during its primary mission of lofting the DSCOVR spacecraft to orbit. With stunning footage of the first attempt – during the CRS-5 mission – showing how close the core stage came to nailing the landing, the next propulsive return will aim to go one stage further.

Returning A Core To A Barge:

Propulsive returns of the core stage has been undergoing testing since SpaceX upgraded its Falcon 9 to the more capable v1.1 variant.

With her nine Merlin 1D engines arranged on an octoweb structure, the taller core has been enjoying a life after staging.

They may well be successful. Hope so.