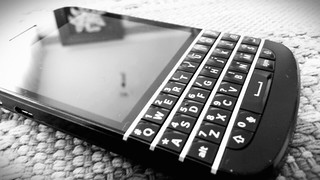 BlackBerry CEO John Chen laid out a net neutrality plan of his own yesterday in a letter to US lawmakers and in a post on the Canadian company’s blog. One part of his proposal in particular has garnered attention: Chen thinks net neutrality rules in the US should force Apple and Netflix to make apps for BlackBerry hardware.

While BlackBerry makes its own messaging service available for multiple platforms, Apple has not returned the favor. Netflix has also “discriminated against BlackBerry customers” by not releasing a BlackBerry app. Chen wrote:

And this is one reason Blackberrys no longer matter. I’m no libertarian but he wants the government to force software companies to make software for EVERY hardware platform?

There may be a need for government regulation but this is plain silly. And self-serving. I mean, who is supposed to pay for all this software development, for platforms that will never make any money for the developer?

As one of the comments stated, “I feel like, “iMessage on Blackberry is what’s keeping me from getting a Blackberry,” should be on Conan’s things no one has ever said skit.”

Yep the only thing holding back tremendous Blackberry sales is iMessage. I mean, look at the picture. Do they even look like smartphones?