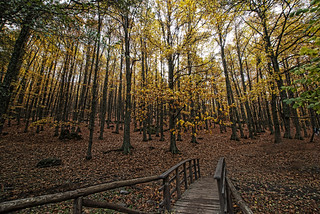 Ive mentioned this technology on ERV before:

Saving the American Chestnut tree from extinction with GMOs

Well the scientists involved think they have finally done it. They have finally made American Chestnut trees resistant to the blight that is literally driving the species to extinction:

Breakthrough at SUNY-ESF: Genetic engineering may save the nearly extinct American chestnut

After 25 years of research, a pair of professors at SUNY College of Environmental Science and Forestry say they have used a gene from wheat to create an American chestnut that could withstand the blight that wiped out up to 5 billion of the trees in the United States.

“It is tremendously satisfying to reach this level of success,” said ESF professor Chuck Maynard, who worked with fellow professor William Powell to build the blight-resistant tree.

Like how GMO Papaya saved Regular Papaya from extinction, its possible that GMO American Chestnut has not only saved the species from extinction, but also can save Regular American Chestnut. Of course it depends on how the blight is spread, but like papaya, perhaps planting armies of GMO Chestnut around Regular Chestnut trees can provide a buffer to keep the Regular trees blight-free.

But not everyone is so excited.

Some people would rather the American Chestnut tree go extinct, than have the species survive ‘unclean’.

The Global Justice Ecology Project has also criticized the SUNY-ESF research, saying it had been supported in part by corporations who want to profit from genetically engineered crops, including Monsanto and ArborGen.

“A look at the partners and funders of this program at SUNY ESF over the years reveals some very disturbing bedfellows,” said the group’s executive director, Anne Petermann, in an article titled “This Holiday Season say NO to GMO Chestnuts.”

“Sorry, American Chestnut trees! If Apple or Samsung sponsored your research, maybe even Google, you would be saved. But MONSANTO *cuescarymusicandlightningcrashes* sponsored you, so BYE BYE!”

Yes, according to these people, even though we could save a species from extinction, we are not supposed to.

I really hate authoritarians who see the world in black and white, good and evil (and they are always good). If we had the time, we might be able to breed a version of the chestnut that would meet the standards of these people.

But we don’t. So we can watch as the entire genetic heritage of a species completely dies.

Or we can save it.

It is so easy to see who thinks as a hierarchical authoritarian, seeing only a binary world, and who sees the world as distributed democracies, where its complexities must be met with nuanced solutions.