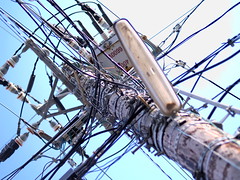 Obama spoke at Cedar Falls Utilities in Iowa, one day after calling for an end to laws in 19 states that make it difficult for cities and towns to create their own broadband networks. Cedar Falls, which is not in one of those states, offers 1Gbps fiber Internet service for $135 a month. Comcast’s fastest residential service tops out at 505Mbps and costs $400 a month.

“Your network is as fast as some of the best networks in the world,” Obama told the Cedar Falls crowd. “Here’s the catch, in too many places across America some big companies are doing everything they can to keep out competitors… In some states it is virtually impossible to create networks like the one you have in Cedar Falls. Today I’m saying enough is enough, we’re going to change that.”

Think what things would be like if electricity was provided by private companies, with a duopoly of two providing electricity to America, with most Americans only able to use one.

Now think about a city deciding to provide electricity to its populace in competition to the private company that actually has no competition.

It was done quite a bit 50 years or more ago. The benefits, because they are non-profit:

They have access to tax-exempt financing for their projects, they do not pay federal income tax and they tend to pay their executives salaries that are on par with government levels, rather than higher corporate rates.

And what happens when the profit motive is removed from utilities?

That financial structure can help municipal utilities supply cheaper electricity. According to data from the federal Energy Information Administration, municipal utilities over all offer cheaper residential electricity than private ones — not including electric cooperatives, federal utilities or power marketers — a difference that holds true in 32 of the 48 states where both exist. In addition, they can plow more of their revenue back into maintenance and prevention, which can result in more reliable service and faster restorations after power failures.

How does this work in reality?

In Massachusetts after Hurricane Irene in 2011, for instance, municipal utilities in some of the hardest-hit areas were able to restore power in one or two days, while investor-owned companies like NStar and National Grid took roughly a week for some customers. According to an advocacy group called Massachusetts Alliance for Municipal Electric Choice, government-owned utilities on average employ more linemen per 10,000 customers than the private companies.

Instead of going into taxes and CEO salaries the money gets plowed back into the system, helping some areas move lines underground.

Could the same benefits be seen if we allowed the public to own access to the Internet?

We will never find out if the GOP and bankers have their way.

The GOP would be all