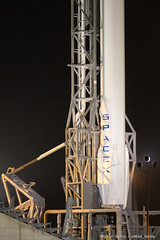 Saturday morning, SpaceX launched its fifth cargo resupply mission to the International Space Station, part of a collaboration with NASA.

But this time SpaceX, nearly did something unprecedented afterward: the first stage of its Falcon 9 rocket landed vertically on a platform floating in the Atlantic Ocean a few minutes after its job was finished. However, the rocket touched down too hard because it ran out of hydraulic fluid, and was damaged in the process:

Rocket made it to drone spaceport ship, but landed hard. Close, but no cigar this time. Bodes well for the future tho.

Didn’t get good landing/impact video. Pitch dark and foggy. Will piece it together from telemetry and … actual pieces.

Normally, rockets are simply allowed to break up into pieces or sink in the ocean after each use. A controlled landing of the rocket could have allowed SpaceX to reuse it on a future flight — and reusing this multi-million dollar piece of equipment, rather than throwing it out after every flight, could dramatically drive down the cost of space travel.

The landing platform, which was damaged during the hard landing. (SpaceX)

But even if the rough landing destroyed the rocket, just placing it accurately on the platform was a big step in the right direction. The company admitted this was a difficult maneuver with a high chance of failure beforehand, and it’s expected they’ll keep trying in future launches.

Slowing it down from hypersonic speeds to subsonic, and then getting even close to a football sized floating platform is amazing.

Just a little more hydraulic fluid might have made the difference.