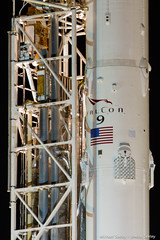 An unmanned SpaceX rocket blasted off on Saturday to deliver a cargo capsule to the International Space Station, but narrowly failed a novel test to land itself on a platform in the ocean, the company said.

“Rocket made it to drone spaceport ship, but landed hard. Close, but no cigar this time,” Elon Musk, founder and chief executive, said on Twitter.

The returning rocket ran out of hydraulic fluid to operate its steerable fins, Musk wrote later. “Upcoming flight already has 50 percent more hydraulic fluid, so should have plenty of margin for landing attempt next month,” he added.

It is good to hear that the likely problem was not enough hydraulic fluid to operate the steerable fins. They already thought this might be a problem and have designed the next one to have 50% more fluid.

The cool thing is that 3 engine firings were needed to work right to get it onto the barge – one to slow it down from several thousand meters per second, one to help orient it and then the last to land it.

The first two appear to have worked perfectly. And the third one actually got it to the barge. It just hit too hard.

Should be easy to fix. Looks likely they have the problems under control and nothing unexpected happened. Next launch is next month.