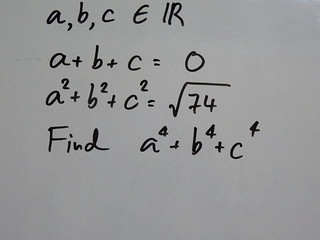 Sony actually did reveal the split of “Interview” rentals and purchases, because algebra
[Via Quartz]

The online release of “The Interview” fared surprisingly well for Sony Pictures, as the company announced total revenues of $15 million from approximately 2 million sales and rentals. The company didn’t provide a breakdown between $15 sales and $6 rentals, but as teacher Dan Myer pointed out, it didn’t have to—a bit of simple algebra does the job.

Solving the equation, x=1.67 million rentals, which means there were 330,000 downloads.

Here’s a link to the math, via Wolfram Alpha (and Daring Fireball).

Here is how the NYTimes reported the numbers:

“The Interview” generated roughly $15 million in online sales and rentals during its first four days of availability, Sony Pictures said on Sunday.

Sony did not say how much of that total represented $6 digital rentals versus $15 sales. The studio said there were about two million transactions over all.

But that was too much for the NYTimes stenographer.