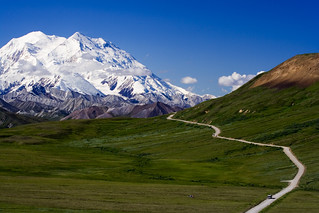 Anchorage, Alaska never saw a day below zero in 2014
[Via Ezra Klein]

As Alaska Dispatch News notes, the last time the temperature was below zero (again: in Fahrenheit) was Dec. 26, 2013. That was the tail end of a cold snap, of the kind not uncommon in winter — particularly in Alaska. But ever since, temperatures have been above zero according to readings taken at the airport, with low temperatures reaching zero only once, on February 11.

Complete annual records from the National Oceanic and Atmospheric Administration begin on Jan. 1, 1954. Since then, the number of days Anchorage went below zero each year has dropped from an average of 33.2 in the 1960s to 16 in the 2000s. The year with the second-fewest below-zero days was 2002 (the red line on the graph above).

There have also been a declining number of days below zero over the last few decades:

Not a good trend.