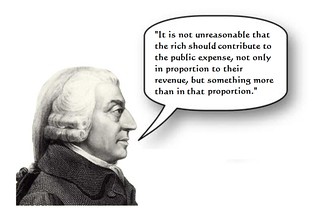 Let’s all screw the 1 percent: The simple move Obama could make to strengthen the rest of us
[Via – Salon.com]

“The economy” in the abstract is doing relatively well, with strong job growth, a booming stock market, and rising GDP. But the American people aren’t feeling it—and Democrats have paid a serious political price as a result—simply because the concrete, individual experience is quite different.  Raising the minimum wage is one way to get at the problem—but for a problem that big, it’s a limited line of attack. There are millions of Americans making well more than the minimum wage, yet still doing much worse than their similarly situated parents did a generation ago.

“So what’s changed since the 1960s and ’70s?” progressive billionare venture capitalist Nick Hanauer asked in Politico back in November. “Overtime pay, in part,” he answered: “Your parents got a lot of it, and you don’t. And it turns out that fair overtime standards are to the middle class what the minimum wage is to low-income workers: not everything, but an indispensable labor protection that is absolutely essential to creating a broad and thriving middle class.”

As set in the 70’s, if you make less than $23600 a year as a salaried employee, you are eligible for mandatory overtime.Adjusted for inflation, that would be $50,440 today.

Simply correcting for inflation would mean that anyone making $50,000 or less would get time and a half for any hours worked over 40 a week. Since the average salaried employee works 47 hours (almost 20% work more than 60), this could be a lot.

Protecting the worker in this way was an attempt by Congress in the depression to correct market asymmetries in bargaining positions. As Adam Smith himself said about these asymmetries:

In all such disputes the masters can hold out much longer. A landlord, a farmer, a master manufacturer, a merchant, though they did not employ a single workman, could generally live a year or two upon the stocks which they have already acquired. Many workmen could not subsist a week, few could subsist a month, and scarce any a year without employment. In the long run the workman may be as necessary to his master as his master is to him; but the necessity is not so immediate.

He also described pretty much exactly what has happened the last 30 years:

Adam Freaking Smith said that legislation in favor of the worker is ALWAYS just and equitable.

If we simply provided the same guarantees as we did up thorugh the 70s but adjusted for inflation, then over 6 million employees would be covered today that are not.

We have allowed inflation to erode the economic well being of millions. It has increased the rapacity of sociaplathic capitalists to the detriment of al of us.