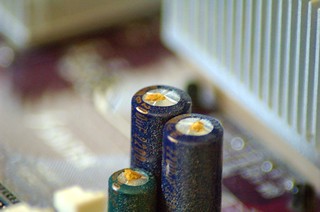 Could hemp nanosheets topple graphene for making the ideal supercapacitor?
[Via — ScienceDaily]

As hemp makes a comeback in the U.S. after a decades-long ban on its cultivation, scientists are reporting that fibers from the plant can pack as much energy and power as graphene, long-touted as the model material for supercapacitors. They’re presenting their research, which a Canadian start-up company is working on scaling up, at the 248th National Meeting & Exposition of the American Chemical Society (ACS) in San Fransisco this week.

David Mitlin, Ph.D., explains that supercapacitors are energy storage devices that have huge potential to transform the way future electronics are powered. Unlike today’s rechargeable batteries, which sip up energy over several hours, supercapacitors can charge and discharge within seconds. But they normally can’t store nearly as much energy as batteries, an important property known as energy density. One approach researchers are taking to boost supercapacitors’ energy density is to design better electrodes. Mitlin’s team has figured out how to make them from certain hemp fibers — and they can hold as much energy as the current top contender: graphene.

From a few months ago but interesting. while fun to think about 1.21 gigawatts and a time-traveling car, supercapacitors hold out some real promise for rapid charging energy storage units.

Plus we all like to see a great new use for hemp.