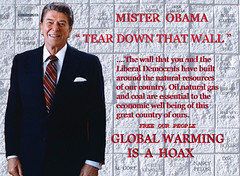 Global Whacking: Some Clarifications
[Via No More Mister Nice Blog]

Duff writes, in comments, with reference to the previous post:

“Sabine, Feely et al. 2004 modelled the time scale of acidification” [my emphasis]. Ah yes, that titchy little word that means so much!

Modeling, Duff, is how science is done. Copernicus and Galileo did not truck around the solar system with surveying equipment measuring where things were in relation to each other (“Got to the sun yesterday, about 93 million miles from Cracow!”); they stayed home and imagined how it might be structured and what consequences such a structure might have that you could observe from earth.

Having done that, they were able to start looking at the data as test data. There was lots of data already, incidentally, and it was very good—as you know, scientists were able to make completely accurate predictions of eclipses and comet visits and planetary movements and so on in spite of their mistaken geocentrism—but it wasn’t sufficient for Galileo’s needs, since the geocentrists had worked out rationalizations to cover their model’s problems; to clinch the question he needed something different, which turned out to be the observation with Galileo’s own 1609 improved telescope of a single planet over a four-month period in 1610.

I picked the above photo  to show a typical denialist argument based on the misuse of theory and model. (Follow the link to see)
His statement is “Global Warming is a Hoax” because it is a theory based on models. This is then followed by lies and cherry-picked data. It reveals a basic misunderstanding of science.
So many people have no clue about science. They get theory wrong and here they get model wrong.

Everything science does is based on models.  Reality is too complex to fully describe.

All we can do is construct a simplified simulacrum of the world and test to see how well it matches reality.
Too simple and we have to alter it to get better explanatory power.
Simple questions may require simple models – the astronomical models of Galileo/Copernicus. But reality often requires much more complex descriptions – Kepler’s ellipses.
Newton was not wrong. His model could only explain a subset of the real world. We needed Einstein and others to construct extended models that did a better job. Scientists remake their models as they get better data.
The denialist model never changes and lacks explanatory power. Because they are ignorant of the realities of science.
Climate models today are much better than they were 50 years ago because we have so much more data that they need to explain. But no data collected in the last 50 years has resulted in wholesale change of the model.
Denialists use a model that fails to explain the data we have. And then they seldom if ever alter it.
A scientific model which fails to explain the data derived from the natural world is changed. A denial model which fails to explain the data is supported even more. In fact, it may be held to tightly, pushing the denialist into a Cargo Cult world.
Anyone who denigrates scientific modeling because it is a ‘model’ is simply ignorant.