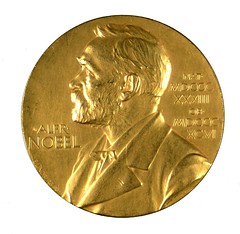 It’s 1940. The Nazis have taken Copenhagen. They are literally marching through the streets, and physicist Niels Bohr has just hours, maybe minutes, to make two Nobel Prize medals disappear.

These medals are made of 23-karat gold. They are heavy to handle, and being shiny and inscribed, they are noticeable. The Nazis have declared no gold shall leave Germany, but two Nobel laureates, one of Jewish descent, the other an opponent of the National Socialists, have quietly sent their medals to Bohr’s Institute of Theoretical Physics, for protection. Their act is probably a capital offense — if the Gestapo can find the evidence.

There was no asking of permission or forms filled out. These brave scientists used their wits to not only save the lives of two fellow scientists but also preserved the medals so they could be reunited someday with their recipients.

By outwitting the Nazis even as they marched into Copenhagen.

Niels Bohr is one of my heroes. Not only a brilliant scientist, he helped many refugees from Germany. The day after he fled to Sweden, and talked to its king about refugees, that country declared it would accept Jewish refugees. In a week he was helping the British on their nuclear efforts. Within two months he was talking with members of the Manhattan Project.

His effect on morale, especially for the young physicists at Los Alamos, was huge.

The gold sat in liquid form from 1940 until the end of the war.

Five years it sat there under the noses of the Nazis. When the war was over, the gold was precipitated out and new medals were struck.