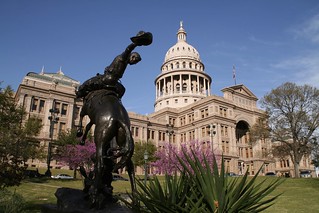 A Possible Explanation For Texas Insanity
[Via Crooks and Liars]

Okay, so you guys keep asking why Texas is so crazy. Hell, where else could Louie Gohmert get elected and Rick Perry be considered a hot presidential prospect?

Well, customer Rick may have found the answer. He was thumbing though old Life Magazines from the 1950’s and found this.

It seems that central Texas had uranium in the dirt and sold that stuff as snake oil. They claimed uranium could cure your ills better than pills and made a small fortune by selling the opportunity to be covered in Texas dirt.

As if that wasn’t weird enough, along comes some “scientific” dudes who started claiming horse hockey because people were getting short-changed on their exposure to radioactivity.

State soil engineers claim that dirt samples they have tested are less radioactive than the granite walls of the state capitol.

Well, there ya go.

So, Texas crazy is not in the water. It’s the foundation on which our state is built.

Maybe it is just more noticeable in Texas because it has the largest state capital in the country.

But this is not a problem with just Texas.. Almost all capital buildings have a lot of granite in them. In fact, many government buildings use granite. And granite can be a source of radioactivity.

This explains why the longer a politician is in the capital the crazier they get.

It is all so simple now. /snark