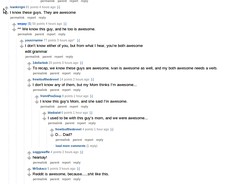 Yet Another Website Kills Comments, Despite Study Showing You Can Have Civil Comments If You Give A Damn
[Via Techdirt]

There’s a trend afoot among some website editors to kill the comment section, then proclaim that they’ve courageously decided to reduce conversation to help improve conversation. It’s a random bit of logic we’ve noted doesn’t make any sense if you’re interested in actually fostering a local community, and care about not having all conversation outsourced to Facebook. The pretense that you’re killing comments because you’re nobly trying to further human communications (and not, say, because your website is cheap and lazy) is also disingenuous. That hasn’t stopped ReCode, Reuters, Popular Science, or some newspapers from killing comments in order to push humans to the next evolutionary level (or whatever).

This week, yet another website joined the “comments are evil and have no use” parade. In a now familiar treatise, TheWeek.com announced that while editors “truly do value your opinions,” you’re no longer going to be allowed to express them on their website. According to TheWeek, this nuclear option was required because comments are just filled with horrible, nasty people:

Of course if news outlets spent a few minutes actually moderating the comments section and treating it like a valuable community resource (instead of oh, a drunk uncle with a bad goiter and nasty halitosis at your wedding), that probably wouldn’t be as big of a problem.

In fact, it’s worth noting that a recent paper published in the Journal of Computer-Mediated Communication found that it’s not very hard to increase civility in your comment section. In some cases all it took was the writer of the article entering the comment section and treating the people there relatively well, even if they’re all busy acting like jackasses:

“One surprisingly easy thing they found that brought civil, relevant comments: the presence of a recognized reporter wading into the comments.

Seventy different political posts were randomly either left to their own wild devices, engaged by an unidentified staffer from the station, or engaged by a prominent political reporter. When the reporter showed up, “incivility decreased by 17 percent and people were 15 percent more likely to use evidence in their comments on the subject matter,” according to the study.”

What they found was that most people will actually respond in a civil manner when civil interactions occur. especially when the person doing the connecting is an important person, such as the one who wrote the article.

When people realize that someone is actually listening to them and responding with respect, most people will dial back the vitriol. And if given the tools, the community will respond by using norms to control the behavior.

This is shown at sites like Ars Technica, where the writer often engages the comments. They also have a social approach where the community can downrate a particular comment. If enough of the group does this the comment s becomes invisible to most (it can still be pulled out if the reader wants to see it.)

I often find that the comments on such sites offers greater insight and explanation than many of the articles.

I almost always notice sites that do not permit comments. It tells me a lot about whether they can deal with distributed democracies or only see things in hierarchical authorities.