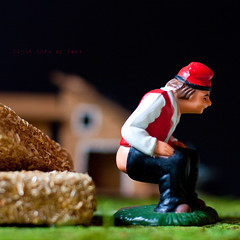 Caganer — the strangest, most scatological part of Catalan nativity scenes — explained
[Via Vox – All] 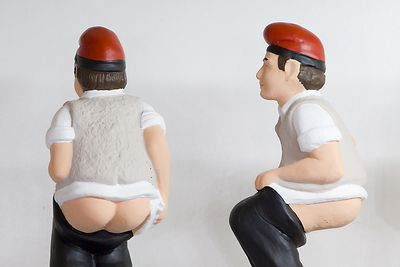 There are the traditional figurines in any nativity display you might see this holiday season: Mary, Joseph, Baby Jesus, the shepherds, angels and the wise men bearing gold, frankincense and myrrh.

Then, there’s one figurine you might be a little less familiar with: the guy with his pants around his ankles, presenting a decidedly different, and far less fragrant, type of offering. That’s a caganer, and in some parts of the world, it’s a staple of the nativity display.

Allow us to explain.

The word “caganer” literally means “the shitter” in Catalan, a Romance language spoken in Catalonia. And it refers to a nativity scene figurine in the act of defecation.

2) How did that ever become a thing?

Scholars aren’t exactly sure when or how the tradition came to be, though there does seem to be a consensus that its roots extend to 18th-century Catalonia — the Northeast area of Spain comprising Barcelona, Girona, Lleida, and Tarragona.

Though excrement is gross, for peasants and farmers it’s actually important since it serves as fertilizer. Some think the caganer was originally a portent of good harvest and fortune to come, a type of fertility symbol. “There was the legend that if a countryside man did not put a caganer in the nativity scene, he would have a very bad year collecting vegetables,” Joan Liiteras, a caganer connoisseur, told the BBC. In the words of an old Spanish proverb, “Dung is no saint, but where it falls it works miracles.”

There might also be theological reasons for the nativity addition. According to Maureen Tilley, professor of Christianity at Fordham University, the caganer is significant because it’s a reminder of the early Christian belief in the Incarnation: that in order to redeem humanity, God had to be fully embodied (incarnated) in human flesh. And what’s a more unifying human trait than “Everybody Poops“?

Some Christmas traditions are insane.