Study: ‘White’ Southerners have more African ancestry than they know
[Via Vox – All]

Many Americans who call themselves white might be surprised to find out that they have some African ancestry. Especially in the South. 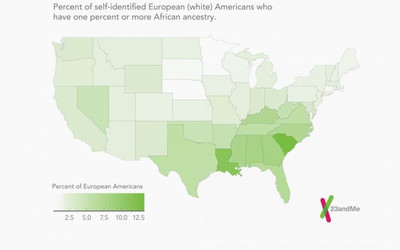 In a new study published in the American Journal of Human Genetics, researchers used the ancestry data compiled by the commercial genetic testing company 23and Me to measure the percentage of African ancestry of people who self-identified as white. It turns out that self-identified white people who live in the South have the highest concentrations of African DNA.

Interesting data. It turns out that a lot of self-identified whites in the South have a lot of Affrican DNA. Not too surprising.

But they also showed some states in which self-identified blacks have large amounts of European DNA – Washington and West Virginia.

But the really interesting data are those that separate out the amount of African DNA from European DNA amongst self-identifying African Americans,

African DNA levels above about 28% usually result in self-identifying as African- American. Below 28% and the chances increase that the person will identify as white.

One has 25% of one grandparent’s DNA so this is close to saying that there is a 50% chance someone will identify as black if they have 1 black grandparent.

One more generation removed would have 12.5% African ancestry, resulting in almost 100% self-identifying as white.

Many Southern states in the late 1800s recognized people with 25% or less African ancestry as white. So this may well be a leftover from previous cultural/legal views.

Now it we could figure out why people who identify as African-American in Washington actually have such low levels of African genes?