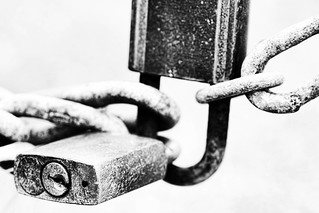 The Limits of Police Subterfuge
[Via Schneier on Security]

“The next time you call for assistance because the Internet service in your home is not working, the ‘technician’ who comes to your door may actually be an undercover government agent. He will have secretly disconnected the service, knowing that you will naturally call for help and — ­when he shows up at your door, impersonating a technician­ — let him in. He will walk through each room of your house, claiming to diagnose the problem. Actually, he will be videotaping everything (and everyone) inside. He will have no reason to suspect you have broken the law, much less probable cause to obtain a search warrant. But that makes no difference, because by letting him in, you will have ‘consented’ to an intrusive search of your home.”

This chilling scenario is the first paragraph of a motion to suppress evidence gathered by the police in exactly this manner, from a hotel room. Unbelievably, this isn’t a story from some totalitarian government on the other side of an ocean. This happened in the United States, and by the FBI. Eventually — I’m sure there will be appeals — higher U.S. courts will decide whether this sort of practice is legal. If it is, the country will slide even further into a society where the police have even more unchecked power than they already possess.

The facts are these. In June, Two wealthy Macau residents stayed at Caesar’s Palace in Las Vegas. The hotel suspected that they were running an illegal gambling operation out of their room. They enlisted the police and the FBI, but could not provide enough evidence for them to get a warrant. So instead they repeatedly cut the guests’ Internet connection. When the guests complained to the hotel, FBI agents wearing hidden cameras and recorders pretended to be Internet repair technicians and convinced the guests to let them in. They filmed and recorded everything under the pretense of fixing the Internet, and then used the information collected from that to get an actual search warrant. To make matters even worse, they lied to the judge about how they got their evidence.

I guess this case will tell us if there are. I expect, given the nature of hierarchical authorities today, that the police will absolutely be allowed to do this.

So the next time you have any sort of repair personnel enter your home, they could well be authorities capturing everything in your home, fishing for anything illegal.

They should not be allowed to. Part of the battle for a free society needs to be vigilant about.