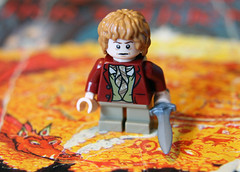 “Both ‘The Hobbit’ and ‘Lord of the Rings’ turn on the ‘return of the king’ to his rightful throne,” and in both stories ” ‘victory’ means the reassertion of a feudal social structure which had been disrupted by ‘evil,’ ” fiction author Damien Walter writes of some of the 20th century’s most celebrated works of imagination.

While science fiction may be liberal and fantasy conservative, they both use a similar narrative – the battle between distributed democracies and hierarchical authorities. Because those traits follow a different axis than left/right.

With few exceptions, high fantasy examines the rightful return to power of a monarch, with a return to the status quo.  The protagonists are those seeking to re-establish order against the antagonists who are being disruptive. Authority must be restored. It often looks back to another time and place.

Much classic science fiction deals with the opposite. The protagonists are those doing the disruption as they overturn hierarchical authorities. It looks forward to another time and place.

In both cases, though, the fundamental battle is between the distributed democracies used by the protagonists and the hierarchical authorities of the antagonists. The difference is on who has the power driving the conflicts.

Katniss and Harry, as well as Frodo, Bilbo, et al. all work to route around the damage done by hierarchical authorities by using teamwork and distributed approaches, by being more adaptive and resilient than their foe.

Fantasy and science fiction are really just different descriptions of the same battle, at least here in the US. We loathe the deprecations of too much centralized authoritarian power and yearn for distributed democratic solutions.

2 thoughts on “A Theory: Fantasy is conservative while science fiction is often liberal”