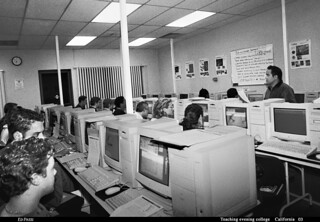 In May 2014 at the all-girls Emma Willard School in upstate New York, nearly a third of the school’s 300+ students were preparing for their final Advanced Placement (AP) exams. But exactly three were studying for the AP Computer Science exam—and they weren’t doing so on campus. The school (full disclosure: my alma mater) completely eliminated its computer science program in 2009.

Emma Willard is an expensive, private boarding school, one that’s academically focused with a high college attendance ratio. If computer science is the new liberal art, a school like Emma Willard would seem a likely poster child. But Emma Willard’s computer science offerings have actually dwindled in recent years from a full-size programming track to a mere intro course to nothing at all. These days, if an Emma Willard student wants to strike out on her own in computer science education, the school will comp her for a session in the Online School for Girls. As fake as the title sounds, it’s entirely real—available classes include an intro to programming, iOS app development, and preparation for the AP Computer Science exam. Roughly two girls in a school of more than three hundred opt to take this route every year.

Before the classes’ elimination, student enrollment slid, too, from ten students to five and then down to a scant two or three each year. Despite the national discussions around coding, STEM careers, and diversity, girls at Emma Willard simply did not appear interested enough in computer science to sustain a program. The school’s former computer science department head and AP Computer Science teacher now works as a Web developer at a different boarding school.

Our education system was pretty much designed to provide the workers for an Industrial Age future – one of assembly lines, simples processes and services, the power of single individuals to teach things to students isolated from one another. Cookie-cutter approaches to repeat success. And copying is forbidden.

Now we are in a world of complexity, of systems, of collaboration, of teams often working together to find useful solutions. Where there are different ways to accomplish the same thing.

And Computer Science is a prime example. While writing code looks like something very hierarchical (one person creating a whole new world), it actually finds its greatest successes in distributed approaches.

In approaches where the creation is a team effort, bringing together different and disparate parts to create something quite complex.

And where there really is not one way to do almost anything. And where people copy other code all the time.

The best way to code is not to learn it in a public school setting. And, as discussed here, public education does not really want to teach CS because it does not fit.

And it will look very different from how public education looks now. It will have to, because distributed approaches always do.