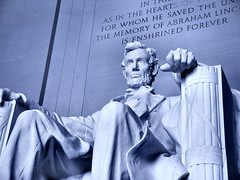 Last week, shortly before Thanksgiving, the idea that congressional Republicans might block President Obama from delivering a State of the Union address first crossed the political world’s radar. The New York Times published a quote from a prominent figure in conservative media pushing the argument; Breitbart News ran a column endorsing the move; and Politico noted unnamed “GOP aides and lawmakers” who like the idea.   Dan Holler, the communications director for Heritage Action, said last Wednesday that he suspects “we’ll hear a lot” about the move.

My suggestion – walk to the steps of the Lincoln Memorial and give the State of the Union there. No reason he has to write it down and deliver it to Congress. Deliver it with Lincoln in the background.

It’s a shorter distance to travel. It might become a new tradition.

Here is how the West Wing showed a President dealing with a recalcitrant and vindictive House: