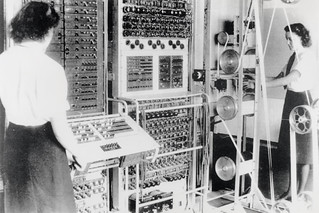 Apple shares took an inexplicable beating from investors on Monday morning, leading to the stock’s single biggest fall since January 28th, 2014. And no one really know why.

An unusual spike in trading volume this morning sent the price of AAPL shares falling as much as 6.4 percent to $111.27 in early trading this morning, leading to a loss of more than $40 billion in market value in just a few minutes.

The cause for the sudden fall in price is still being debated among the Wall Street crowd, but Reuters reports that an acceleration in the sales of AAPL shares could have sent the stock tumbling. At 9:51AM EST, more than 6.7 million shares were traded in a one-minute stretch – the heaviest single minute of AAPL trading since October 29th.

This happened too fast to be human based – almost 7  million shares in less than a minute, dropping almost 6 points.

Perhaps it is a self aware AI testing the waters unseen. Maybe Colossus has come into being.