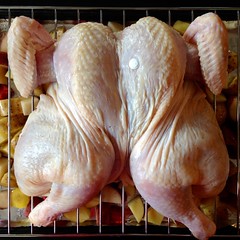 Americans have been cooking Thanksgiving turkeys for more than 100 years. But it’s only the last few when a radical innovation in turkey preparation has started to become mainstream: “Spatchcocking,” or removing the backbone and flattening the turkey. This process—also known as butterflying, and common for preparing chickens—reduces the roasting time for a turkey from roughly three hours to around 45 minutes. Freeing up both oven and host, it’s a complete Thanksgiving game-changer.

Spatchcocking awareness—measured by Google Trends data, which represents search interest—grew modestly for years, until 2012, when it spiked. It has since become even more popular during Novembers, when Americans celebrate Thanksgiving.

I got a 20 pound turkey for free this year. I decided to spatchcock it – remove the backbone, break the breast bone to flatten, dislocate the thigh and cook.

It took about 2 hours to cook the turkey. But what was cool – I could easily cut off the two legs and put them on a cookie sheet (with a lip). I put this one the lowest shelf in the over. Then I put the breast on another cookie sheet to put on another shelf, with plenty of room for the stuffing casserole and a spinach-artichoke casserole.

Normally the entire chicken would take up one shelf, complicating cooking the other dishes.

So not only did it cook faster but there was more  efficient use of space in the oven. And cutting the meat off the bones was trvial, much easier than a normal turkey.

And the entire family thought it was the best turkey dinner I had ever made. Even though it was a frozen turkey  the meat was moist and very flavorful.

Spatchcock for the future.

I am doing this every year.