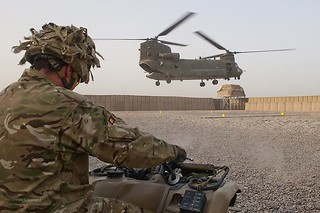 SAS quad bike squads kill up to 8 jihadis each day… as allies prepare to wipe IS off the map: Daring raids by UK Special Forces leave 200 enemy dead in just four weeks  | Daily Mail Online
[Via]

SAS troops with sniper rifles and heavy machine guns have killed hundreds of Islamic State extremists in a series of deadly quad-bike ambushes inside Iraq, The Mail on Sunday can reveal.

Defence sources indicated last night that soldiers from the elite fighting unit have eliminated ‘up to eight terrorists per day’ in the daring raids, carried out during the past four weeks.

Until now, it had been acknowledged only that the SAS was operating in a reconnaissance role in Iraq and was not involved in combat. But The Mail on Sunday has learned that small groups of soldiers are being dropped into IS territory in RAF Chinook helicopters – to take on the enemy.

This is how you deal with a disbursed guerrilla force. They need defined supply lines to get the ammo, etc to their troops.

So, using drones to see what is happening in the dark, mobile British troops rapidly run up to the ISIL troops with their quads, open up with the mounted guns and then disappear. They have both machine guns and sniper rifles

We’re degrading their morale. They can run and hide if they see planes in the sky but they can’t see or hear us. Using so many snipers takes the fear factor to another level too; the terrorists don’t know what’s happening. They just see their colleagues lying dead in the sand.

They are dropped in from Chinook helicopters on their quads perhaps 50 miles from the ISIL troops.Ride up on them, kill a bunch, unobserved and then ride off.