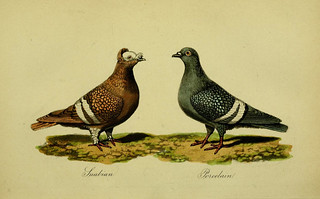 Your Inner Feather
[Via Phenomena » The Loom]

Feathers are like eyes or or hands. They’re so complex, so impressive in their adaptations, so good at getting a job done, that it can be hard at first to believe they evolved. Feathers today are only found on birds, which use them to do things like fly, control their body temperature, and show off for potential mates. The closest living relatives of birds–alligators and crocodiles–are not exactly known for their plumage. At least among living things, the glory of feathers is an all-or-nothing affair.

But the more we get to know feathers, the more we can appreciate how they evolved. The general rule is that complex things–be they feathers, hands, or eyes–take a very long time to evolve. As I wrote in National Geographic in 2011, the fossil record has gone a very long way in helping us to understand how feathers took on the form we see today. Birds evolved from dinosaur ancestors, and those ancestors already had feathers. Feathers started out as simple filaments, turning to fuzz, and then diversifying into a lot of different forms–including the ones that eventually let birds take to the air.

Now a new study in the journal Molecular Biology and Evolution offers an even deeper look into the history of feathers. Instead of looking at fossils, the scientists look at the genetic recipe for feathers written in the DNA of birds. It turns out that a lot of that recipe already existed hundreds of millions of years before anything vaguely resembling a feather existed on Earth. In fact, you, my fine unfeathered friend, have most of the genetic information required for making feathers, too.

Scott Edwards, a Harvard ornithologist, and his colleagues couldn’t have carried out this study even a few years ago, because scientists have only recently figured out a lot of the details of how feathers develop. Bird embryos starts out featherless. But in their skin, they develop lots of tiny blobs of cells known as placodes in which cells are switching on genes in a distinctive pattern. The reason that certain genes switch on in the placodes and others don’t is that genes have little on-off switches near them. If a particular combination of proteins lands on a gene’s switch, the gene will start making a protein of its own.

Over 150 years ago, Charles Darwin was fascinated by the variability of pigeons. Selective breeding had produced hundreds of different varieties. How did a single species produce so many different shapes and feather patterns?

It helped underpin his grand theory, shifting from the effects on survival traits seen in artificial selection  to those from natural selection.

This fascination with the variability in form of domesticated birds may well help us understand how and when feathers developed.

Our ability to rapidly sequence whole genomes now allows us to investigate minute genetic changes between different animals. And if those animals are members of s single species but with obvious physical differences (phenotypic change) then we can much more quickly identify the regions of genomic change (genotypic change).

Because almost all the rest of the genome is the same but for the genes responsible for the phenotypic change.

Searching the literature, the researchers identified 193 genes that appeared to be responsible for controlling the look and shape of feathers.

This harkens back to Darwin’s fascination of pigeons for their variability. I would suspect that having so many genetic variations in feathers and patterning in domesticated fowls helped identify the almost 200 genes involved.

Nature does not normally allow quite so much genetic variation. So, instead of having to study hundreds of different species of birds to examine the variations that natural selective provides, we have the results of years of selective breeding on just a few species.The former would have been clouded by other genetic changes that might have little to do with feathers.

The latter – not so much confusion. Looking for genetic change that produces a certain phenotype is much easier when almost all the genes are exactly the same between animals.

What they also looked for were nearby conserved regions that identified regulatory elements. The expectation is that any region important for controlling the phenotype of the animal will see greatly refuced change compared with regions that serve no such purpose.

Non-essential genomic regions will accumulate random changes. Regions important for gene expression will see much less change than predicted from randomness. Because they are important and change is usually selected against.

This then makes it easier to identify the 13,307 regions outside the genes coding for proteins that regulate  feather production and coloring. They are called CNEE – conserved non-exonic elements.

Yes, there are over 50 times as many regions of DNA that control gene expression than there are genes. At least for feathers. No wonder we see so much variation in feather shape and color. Just slight changes in a CNEE could alter the expression of these proteins in different cell types, producing something quite different.

And they are all found within regions of the genome that do not appear to make any protein.

So this demonstrates just how complex things can be. A wide variety of feathers in all sorts of colors can be derived from a complex ballet between a large number of NCEE and a small number of genes.

Another interesting thing the researchers found was that the genetic toolkit that led to feathers can be found in earlier species. What happened was an enrichment and expansion in the number of the specific feather genes and their control region in birds.

They see a large increase in the number and variety of genes and control regions leading to feathers when birds split off from dinosaurs and reptiles. Similarly, they see an earlier increase in these genes when animals moved from the sea to land.

Since these genes produce some of the major proteins involved with structural elements of an animal’s body, it makes sense that there would have to be a lot of genetic changes moving from the aquatic environment, where the water does a lot of supporting, to the terrestrial,where the body has to provide greater support.

Finally, the truly unexpected finding they made was identifying control regions that were not near any known gene for making feathers. So what was being controlled?

It turns out that while these genes are not involved in feather formation, they are involved in determining the size of the body and limbs of the bird. This helps explain why animals expressing feathers got smaller but with longer arms.

The same regulatory regions that were producing feathers were also producing body shapes that would allow those feathers to be useful for flight.

Variability may largely come from small changes in these regulatory regions than large changes in a protein. We can only see this because we can sequence entire genomes now and look at all these regions that were previously missed.

Because they do not code for any proteins..

Makes one wonder what else we may be missing.