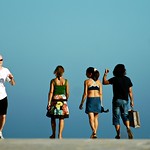 These are the safest cities in America for women
[Via Quartz]

Regardless of its bigoted editing, the Hollaback video that went viral in October documented a nasty reality: Even just walking down the street, many women don’t feel safe. But are they?

In the US, that depends on where in the country they live, according to new research by ValuePenguin.com, a financial research firm that created weighted rankings of 285 American cities based on rates of murder, rape, or stalking. For instance, female residents of the Chicago suburb of Naperville, Illinois, are much less likely to be victims of violent crime or stalking than those in Anchorage, Alaska, all else being equal.

“Hopefully this will give people some numbers to sink their teeth into when talking about issues like sexual harassment and rape culture,” says Padmini Parthasarathy, an analyst at ValuePenguin.com. “And maybe some women will start voting with their feet.”

Here are some other highlights and lowlights of the report (note that we’re using “rape” to mean incidents of female sexual assault, excluding statutory rape):

One can always argue about methodology and data for these sorts of things but it does have Seattle as the 4th safest large city for women.

Meanwhile, Oklahoma has 2 of the top 10 worst cities for women.

One thought on “Seattle safer for women”