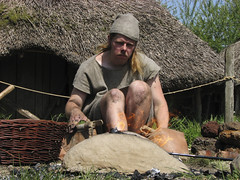 Climate change was not to blame for the collapse of the Bronze Age
[Via Phys.org – latest science and technology news stories]

Scientists will have to find alternative explanations for a huge population collapse in Europe at the end of the Bronze Age as researchers prove definitively that climate change – commonly assumed to be responsible – could not have been the culprit.

There had been some speculation that climate change had led to a collapse of Bronze Age empires with substantial decrease in the human population.

But a much more granular examination of the climate record and human activities shows that wetter weather intruded several generations after the collapse.

Wo what caused the collapse? New technology.

According to Professor Armit, social and economic stress is more likely to be the cause of the sudden and widespread fall in numbers. Communities producing bronze needed to trade over very large distances to obtain copper and tin. Control of these networks enabled the growth of complex, hierarchical societies dominated by a warrior elite. As iron production took over, these networks collapsed, leading to widespread conflict and social collapse. It may be these unstable social conditions, rather than climate change, that led to the population collapse at the end of the Bronze Age.

The necessary ingredients for a Bronze Age culture required large complex societies. The only mode humans had at the time to effectively sustain this were hierarchical authroitarian ones.

Iron could, with the right technology, can made almost anywhere. It is found throughout the world, meaning that not only was a stronger metal available but to a larger, distributed audience. Meaning that hierarchy was not longer necessary for the domination of others.

The collapse of Bronze Age hierarchical societies may well have come from their inability to deal with the distributed democracies of iron, resulting in warfare that caused their collapse.

So we see a lack of human activity until the iron age civilizations rebuild the hierarchies.