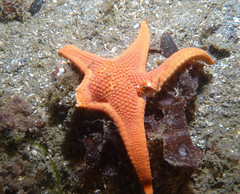 In June 2013, starfish on the western coast of North America started wasting away. At first, their arms curled from the tips, and they tied themselves into pretzel-like knots. Their bodies deflated. White festering sores appeared on their flesh. As the lesions spread, their flesh rotted away and their arms fell off. Within days, healthy animals had disintegrated into mush.

This condition, known as sea star wasting syndrome (SSWS), was recorded as far back as the 1970s, but the scale of this recent event is unprecedented. It has hit at least 20 species all along the Pacific, from Alaska to California. In less than a year, huge, thriving populations have completely wasted away.

As the stars blinked out, scientists compiled a list of possible causes that included storms, rising temperatures, and pollutants. But an infection always seemed likely. The disease seemed to move from place to place with the character of a spreading epidemic. Most tellingly, starfish in aquariums started dying too. These animals were housed in controlled captive environments but they were immersed in water pumped in from the surrounding ocean—and that was enough to kill them. Filtering the water through sand didn’t help. The only measure that spared the stars was sterilising the water with ultraviolet light. Whatever was killing the animals was microscopic and biological.

The research could not fulfill all of Koch’s postulates mainly because we do not appear to have a way to grow the virus in pure culture.

But they did a lot of nice work showing it is a virus and what that virus might well be. We do not know just why the virus is destroying populations, if it is a direct or indirect in the deaths and why the virus seen today is  deadly when it can be isolated from material harvested in the 40s.

Lots of useful research to figure this all out.