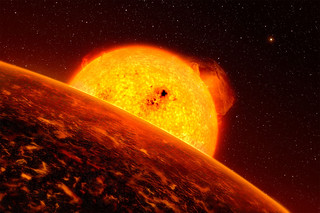 Science Offers New View of Hopes for Human Survival
[Via Truthdig: Drilling Beneath the Headlines]

Astrophysicists say questions about the sustainability of civilization on our high-tech planet may soon be answered scientifically as a result of new data about the Earth and other planets in its galaxy.

The paper is open access so take a look. The Drake Equation is a very famous attempt at discovering the likelihood of live elsewhere in the universe. One factor – fc – details the “fraction of civilizations that develop a technology that releases detectable signs of their existence into space”.

In the paper they discuss how the manipulation of energy will necessarily change the physical parameters of the planet, especially a factor called entropy.

Entropy is mostly a mathematical term, whose properties are difficult to describe in simple terms. calling it the randomness or disorder of the system does not help a lot.

Just realize that any civilization that uses energy to sustain itself will alter the thermodynamic properties of its environment, especially the entropy. This can be measured.

So, first they provide an interesting way to  think about  determining whether an exosolar planet has a high level civilization on it – simply look at the thermodynamics.

And they also model that any civilization that uses energy to sustain itself will necessarily reach a sustainability crisis where the available energy, population and entropic effects (ie CO2 levels) potentially cause collapse.

One outcome of such modeling may be to find that a greenhouse phase and a sustainability ‘‘crisis’’ are a generic feature of at least some subset of the ensemble. The question then becomes how common and enduring such a phase is, and, more importantly, what characterizes successful paths out of such a crisis, i.e., what leads to long mean SWEIT lifetimes ¯L?

The paper does not solve anything or tell us how we might make it past this crisis. What it does is suggest connection the work of sustainability science with astrobiology.

We note in conclusion that in Payne and Clapham’s (2012) review of the End-Permian mass extinction (subtitled ‘‘An Ancient Analog for the 21st Century?’’) the authors state: ‘‘The geological record is increasingly essential as an archive of past experiments in global change. . . The best – and most sobering – analogs for our near future may lie deeper in Earth’s past.’’ The purpose of this paper has been to broaden such a conclusion to include the whole of astrobiological studies.

More research may not only tell us more about the possibility of life elsewhere but also help model what we can do here on Earth to overcome this crisis.

As the author’s state:

One point is clear, both astrobiology and sustainability science tell us that the Earth will be fine in the long run. The prospects are, however, less clear for Homo sapiens.