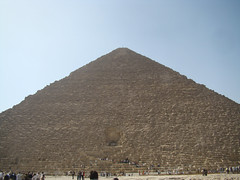 Aside from religion, what can actually stop scientific progress?
[Via Quora]

Better to ask what retarded scientific progress across 6000 years of feudal societies, pyramidal power structures with a few lording it over ignorant masses.  The priesthoods in those societies (often) did repress questions and defended rigid dogmas.  But mostly in service of that lordly caste.

I agree with David Brin – religion is a symptom. Hierarchical authority works against science and all the forces we have assembled to live in the world around us.

Animals survive by adapting to the environment. For humans, creating better models of the world  is what science does, to allow us to better adapt and survive in this world.

However, this uses distributed democratic approaches (ie books, academies, journals, the Internet) requiring openness and transparency to allow the right information to get to the right place at the right time in order to find useful answers.

Without these distributed approaches, ones that have become ascendent since the dawn of the Age of Reason, science is only alchemy.

Hierarchical authority is great at taking action, at doing things. But because of how hierarchies are constructed (atomizing complex problems through analysis and then attempting to synthesis this back together), only the people at the top can actually know everything.

Everyone else simply obeys orders.

And even that does not always work well. Sometimes it becomes impossible to synthesize complex problems in this way – the broken pieces of Humpty Dumpty simply cannot be synthesized back into a whole.

As this graphic shows, the great army of Napoleon was vanquished in Russia by much more complex battles than with Russian soldiers.

The most successful societies realize that distributed approaches are needed, with dispersed, distributed power and responsibilities. The first modern military general to discuss this – Helmuth von Moltke the Elder – famously stated that “no plan survives contact with the enemy. He also said strategy was a series of adaptive, expedient moves as things developed, rather than an overarching hierarchical plan.

Any hierarchical organization or society becomes only as smart as the leaders. We can look at history and wonder why so many leaders did things that in hind sight look so ‘stupid’.

Which do not trust distributed approaches because these move outside the hierarchy – the source of the authoritarian’s power.

Religion is simply a hugely hierarchical organization of authority.

And as authority requires stricter and stricter use of hierarchy to maintain power. Which means it hates the distributed approaches of science.

Thus it tries to crack down on science, belittle research and ignore warnings that will make the society less adaptive and able to survive.

And thus every other great civilization has ended. The inability to be adaptive by supporting the distributed approaches of science killed them.

Troy had its Cassandra. We have our scientists.

Those that try to constrain science, to corner it, to prevent its need for distributed democracy, are the ones to fear. If anything destroys our current level of civiization, it will be the auhoritarians.

As they have done every other time.

4 thoughts on “David Brin answers – Aside from religion, what can actually stop scientific progress?”