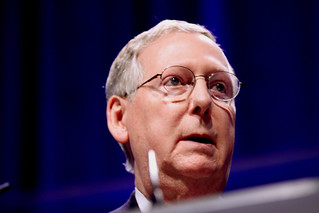 The Obama administration on Friday plans to publish a small library’s worth of climate change documents, outlining 38 federal agencies’ vulnerabilities to global warming and how they will address them — as well as a separate and even larger set of new government-wide plans to cut down on greenhouse gas emissions and achieve new targets for sustainability.

In sum, the reports represent over a thousand pages of climate change threat assessment and sustainability planning by a vast federal complex that collectively operates 360,000 buildings, maintains 650,000 vehicles and spends $25 billion on energy costs per year.

A political party with leaders that refuse to see the problem.

They actually scuttled what had been a 2014 bipartisan bill , the Energy Efficiency Improvement Act increasing energy efficiency, including in Federal buildings. 191 Republicans joined 184 Democrats in the House in March to pass the bill. The parties in the House actually agreed on something.

But Republicans in the Senate would not allow the bill to come up to a vote, threatening a filibuster. They wanted amendments dealing with repealing Obamacare. Another amendment dealt with the Keystone Pipeline.

They tried to Christmas Tree the bill into oblivion. They succeeded.

So it never got passed.

It will take at least 2-4 election cycles of real change in Congress to get legislators serious about this problem. That is 2-4 cycles AFTER they begin to see the problem. Especially since it is likely that the next few cycles will actually see several large steps backwards.