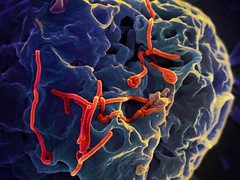 Christie on Ebola policy: ‘We’re not moving an inch’ –
[Via CNN.com]

New Jersey Gov. Chris Christie tried to stamp out criticism Tuesday of his policy to quarantine health care workers returning from Ebola hot zones, describing his rule as “common sense” and vowing that he won’t move “an inch” on the standards his state has set forth. He also tried to address critics on the other end of the spectrum who say his decision to let a health care worker go on Monday was a sign of him caving in to political pressure.

What an authoritarian does when they make a mistake – never, ever admit it, even as they alter policy to do the opposite of what they were claiming last week.

Authoritarians actually get extra support from others who support hierarchical authority even as their ship goes down. These people admire someone sticking to their principles, even as those principles are shown to be wrong and maladaptive.

Authority has its place, but dealing with complex things like infectious disease and healthcare is not a place for hierarchy to go it alone.

We have seen great distributed approaches to dealing with Ebola. As often seen, the first solution is not always right but having a quick response means we get to the right answer sooner.

Here, we see a concerted and distributed democracy approach that eventually forced the hierarchical authoritarians to alter their pronouncements, even as they refuse to admit they did any such things.

Cargo Cult Worlds are such a dangerous thing, pulling people into a view that simply no longer matches the real world.

A world where the US has seen a 0% mortality rate for those infected with Ebola in the US. And politicians now are looking at the personal cost of quarantines, realizing that the State bankrupting someone who is never ill is not good policy.

Maybe we will get to a better balanced approach soon.